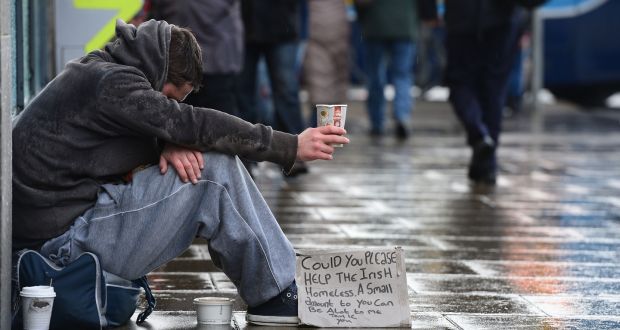 The months are getting colder and colder, the leaves are falling off the trees, we’re all looking forward to Christmas. The weather has been dry so far and we’re all hoping that the rain holds off… because you know, there’s nothing worse than getting lashed on when your rushing from the train or bus to work. Wet feet for the day, hair ruined… ugh.

My walk to work from the train station takes literally 5 minutes. On the way to work I see at the very least 5 homeless people (5 people in 5 mins!). They are all at their regular spots, from time to time they change but its mainly the same people. Some are Irish, some are not. Some are drinking in the morning, some are not. Some are clearly intoxicated with whatever their choice of drug is. Some days those drinkers and drug addicts are not intoxicated, but they are still homeless.

If I go out to lunch, I walk towards Grafton st. to get some food or maybe do some shopping. On my way I find myself passing more homeless people, at least one person every few hundred feet.

Every homeless person I meet asks me for money. Sometimes I give some change if I have it handy. A couple of times I’ve given the man near the grocery store I go to some fruit from the work supply i’ve just bought. Most of the time I don’t give anything. Even if I have it, I tell them no and then walk right back by them with a cup of coffee in hand, or lunch I’ve just bought with the money I can’t spare for them. I always feel awful about it.

I’m not a mean person, my main reason for not giving anything is that there are so many homeless people I pass who need my help and I can’t possibly give to everyone. I don’t even mind that if I give them money they might use it for drugs. Each to their own. But I just can’t afford to give to everyone all the time. I see these people every day. It breaks my heart to see so many homeless people on the streets especially coming into winter. I’m worrying about wet feet and these people have no shelter from the rain or cold full stop.

It has been bothering me for a while now and I finally decided I wanted to do something to help. Its not a huge gesture but it’s a start… I decided to set up a direct debit donation to the Dublin Simon Community. I can’t give to everyone, but I can give to a reputable charity who are helping homeless people in Dublin every day. Homelessness can happen to anyone, its never a choice.

The Simon Communities throughout Ireland provide the best possible care, accommodation and support for people experiencing homelessness and those at risk.

Dublin Simon Community provide services to over 3,000 people in Dublin, Kildare, Wicklow and Meath who are homeless or at risk of homelessness. Services range from:

Why I donate and why you should too!

So Guys, I don’t know if this piece has made any sort of impression on you, its more of a personal account of why I decided to donate to a homelessness charity but I hope it has struck a chord. If you’ve been thinking about donating to charity recently, or maybe you’ve noticed just how bad the homeless crisis is in the city, now might be the time to donate.

If you haven’t been thinking about it at all, maybe give it some consideration. The next time you’re running to work in the rain from the bus, or you’re taking off your wet jacket and commenting on how cold it is as you walk through the door of your home, you might remember this piece and spare a thought for all the people who are on our streets with no home to go to.

Christmas is coming up. Maybe its the good deed for the year you’ve been looking for and just maybe you will be the difference to someone out there. The charities can use all the help they can get.

My chosen charity is the Dublin Simon Community. Its so easy to donate, I’ve chosen a monthly direct debit but you can also make a one time donation if you can’t commit to a monthly payment… Every little helps!

Clink on the link to make your donation today:

You can also txt to donate:

My Tweets
Join 368 other followers